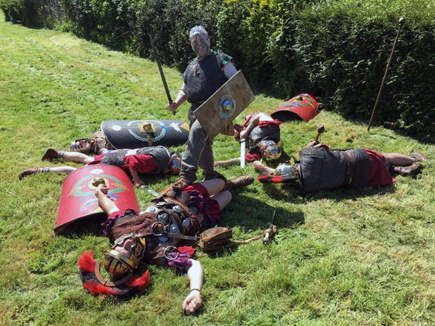 It's back! After the success of the first event we are pleased to announce that Caersws is hosting a second Roman festival.

On Saturday 12th May 2018 at the Village Hall from 10am there will be stalls, activities, refreshments and entertainment. Back by popular demand will be the Deva Victrix Legio XX Roman reenactors. Come and meet them! 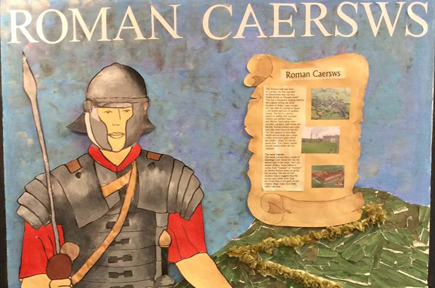 A free to enter community event
about the Romans and Caersws.

Information and activities for all ages.

Look out for posters for more information.

Twristiaeth Caersws Tourism is a community group aiming to raise awareness of what this village in Powys has to offer and encourage more people to visit.

Twristiaeth Caersws Tourism now has a Facebook page to further promote our village and our work.

The Facebook page includes news of forthcoming events, as well as other items of interest and things to do. 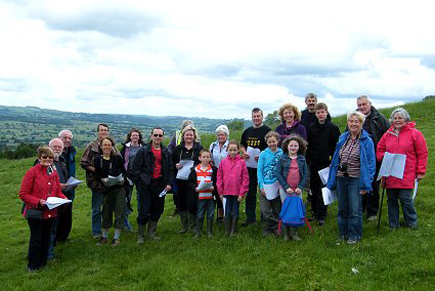 Organised by community group Twristiaeth Caersws Tourism in association with CPAT, a public outing to investigate and picnic on the site of Cefn Carnedd took place on Sunday 17th June.

A hillfort built during the Iron Age (AD750 - AD43), Cefn Carnedd occupies a long hilltop and commands views over the Severn valley. While there has never been an archaeological excavation of the hilltop, study of the ramparts and ditches has suggested that the hillfort expanded and grew more complex during the time of its occupation during the Iron Age.

An interesting feature of Cefn Carnedd is its apparent reuse at a later date, suggested by the presence of a more clearly defined bank and ditch cutting off a section of the hillfort at the SW end. It is possible that this use dates to the Romano-British or Early Medieval periods.

The fields in which Cefn Carnedd now lies are private property, and Twristiaeth Caersws Tourism are very grateful to the landowners for allowing us to enjoy this fantastic site and its tremendous views. 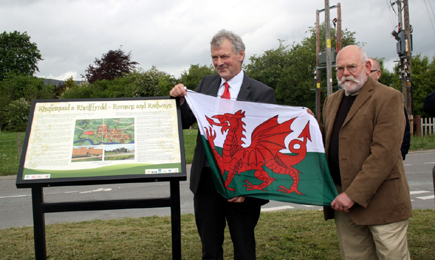 Unveiling of interpretive board depicting the Romans and Railways, Glyn Davies MP and Glynn Cook, Chairman of Twristiaeth Caersws Tourism 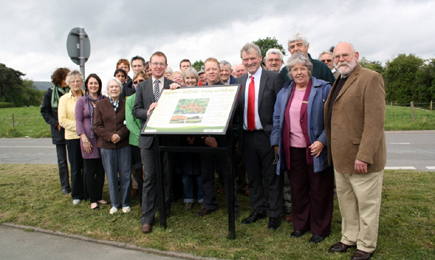 Celebrating the history of Caersws, Russell George AM and Glyn Davies MP with members of Caersws Community, unveiling of interpretive boards

Caersws is a Victorian village with ancient origins, the unique history of the village and the community was celebrated and shared recently with the erection of interpretive boards at points of interest in Caersws and Llanwnog.

Glyn Davies MP kindly agreed to officially unveil the boards at a ceremony organised by the group responsible for the completion of the project, Twristiaeth Caersws Tourism. As he unveiled the board depicting the history and influence of the Romans and Railways in Caersws, Glyn highlighted the importance of localism, supporting and valuing culture and communities and concluded by saying "it's fantastic to recognise the things that make Caersws different".

The unveiling was also attended by Russell George AM, representatives from local organisations, CPAT, RCAHMW, the Caersws Community Council and members of the Twristiaeth Caersws Tourism group. Glynn Cook, Chairman of Twristiaeth Caersws Tourism thanked everyone for attending and expressed special thanks to all those who had contributed to the success of the project.

The group received a grant of Â£5,258 from the Powys Regeneration Partnership grants programme - Community Welcome Scheme, which is managed by Powys County Council Tourism Section. The remainder of the monies needed to complete the project was raised by fundraising events and donations from other local organisations, which included the Caersws Community Council, Margaret and Gwendoline Davies Charity, Caersws Quoits Club and Caersws Trotting Club.

The interpretive boards provide information on the Romans, the Victorian era, the railways, Welsh bard John Ceriog Hughes and much more. The history of the community is on display for locals and visitors to enjoy, highlighting the rich potential and attractiveness of Caersws and the surrounding area as a tourist destination and to celebrate the unique history and environment of the community.

Visit the main car park to view the "Welcome to Caersws" board and discover the location of the other four boards.